Graham discovered hypnosis back in 1983 when he found a classified ad in the back of a Rolling Stone magazine that said, “Double Your Income Guaranteed With Hypnosis.”

What was offered was an audio cassette that contained a hypnosis program by a renowned hypnotist, Barry Konikov who founded the self improvement program company, Potentials Unlimited.

James Graham then sent fifteen dollars to the company and received the audio cassette back a few days later.  Contained within the package was the instructions for the hypnotist program.  The instructions simply said, ” Play side A every night at bedtime and play side B during the daytime.”

To clarify, the A side of the cassette contained a guided hypnosis meditation with a  hypnotist speaking and guiding the listener into a hypnotic trance. What follows are suggestions for new ways of thinking about money, success, wealth and abundance.

On side B, there is music and the same suggestions for change and transformation but there is no hypnotist giving instructions to go into a hypnosis trance. This is called a subliminal audio program.

Windsor Ontario Hypnotist James Graham followed the instructions and began playing the audio hypnosis program that very night and every night afterward.   He also played the B side of the cassette during the day.

After playing the Make More Money hypnosis program every day and night, within two weeks, Graham received an income offer that was doubled his money and income. From that point on, the Windsor Ontario Hypnotist was hooked on hypnosis.

James Graham’s hypnotist program website has many audio hypnosis programs for instant download as well as information about hypnosis, self-development, and self-improvement.

If you have any questions or would like to learn more about how you can improve your life with hypnosis, hypnotist James Graham is available to be contacted through his website contact page which can be found here. 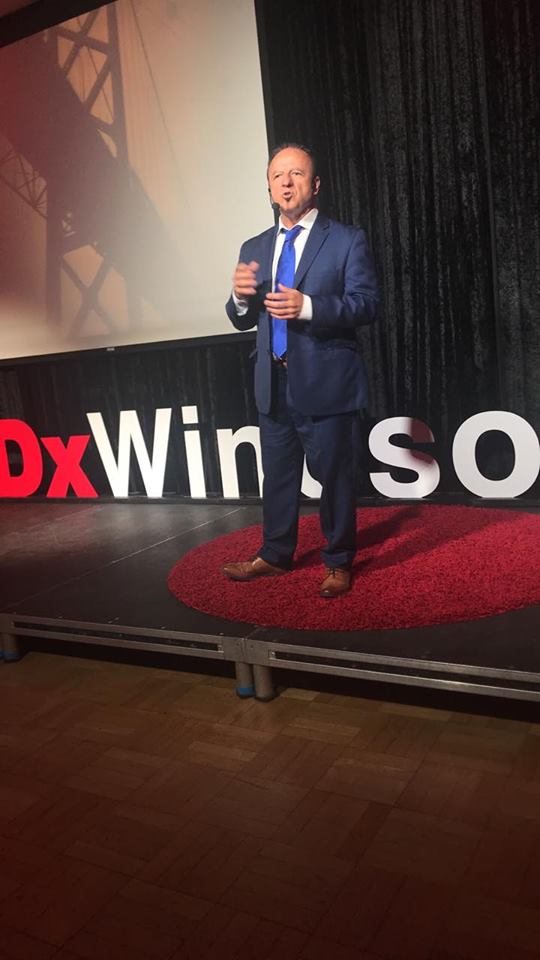 The TEDx Program is designed to help communities, organizations and individuals to spark conversation and connection through local TED-like experiences.

This Windsor Ontario TedX event was organized by local Windsor Ontario people who loved the idea of Ted Talks and auditioned James Graham hypnotist and sixteen other speakers to provide a full day of ideas worth spreading.

Each speaker was allowed seventeen minutes to speak on their topic. Six speakers were featured during the morning session. Graham was the first speaker after the lunch break.

As the Windsor Ontario hypnotist took the stage, everyone in the audience was on the edge of their seats, wondering what would come next. After all, James Graham hypnotist does hypnosis and the audience was wondering if James would get them all to cluck like chickens during his speech!

James Graham‘s topic was on the power of visualization. Visualization is the process of using your imagination to create pictures in your mind that causes the subconscious mind to focus on getting results.

Once James began to speak, the Windsor audience embraced the hypnotist and followed along as Graham taught them how to use the powers of their imagination to visualize their dreams and make them a reality in their inner Universe.

The entire crowd enthusiastically participated in what is known as “suggestability tests” to get their imaginations working. The suggestibility tests that the hypnotist used were the magnetic fingers test, the light heavy hand test, and the eyes glued shut test. These tests are the standard tests that most hypnosis practitioners use during hypnotist comedy shows .

The next experiments the Windsor Ontario hypnotist shared with the audience was imagination exercises. First, James had the audience imagine a big red firetruck. Then Graham instructed the audience to imagine a pink elephant. After these two exercises, the hypnotist asked the audience how many people saw what he suggested that they imagine in their minds. Most of the audience raised their hands in affirmation.

After these fun mind games concluded, James had the entire audience close their eyes, then focus on one goal that they wanted to achieve. As they began to imagine their goal, Graham had them imagine experiencing their goal as if it was already happening. Then the hypnotist had the audience feel as if they had already accomplished their goal.

Finally, he had everyone in the audience open their eyes and high five each other and congratulate the person beside them for accomplishing their goal. This resulted in a standing ovation for Windsor hypnotist James Graham!