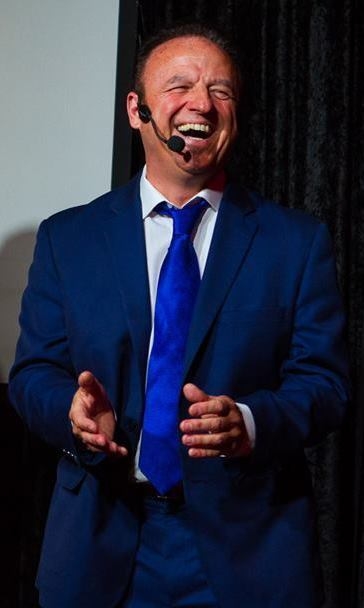 It’s been an exciting summer for the Windsor Ontario Hypnotist in 2019.

James successfully completed a 23 date Midwest United States high school hypnotist show tour that lasted from mind-April to mid June. This tour took him thru Michigan, Ohio and Indiana. He then capped it off with the Raptor’s game party in June as well.

To end June off, the Windsor Ontario hypnotist was flown  to Albuquerque New Mexico to speak to a group of Financial planners about the power of the mind.  Graham’s keynote speech was based on his best selling book Master Your Matrix. James motivated the group by sharing tips and techniques on goal visualization and subliminal sales techniques.

Graham, then finished off the conference with his hilarious corporate hypnotist show entertainment for the amazed audience.

In July of 2019, the hypnotist from Windsor Ontario charged down to Beverly hills California to speak to a group of real estate agents. Once again, his keynote presentation was based on his Master Your Matrix book. James then followed his corporate presentation with a hypnotist demonstration to make his point to the audience.

To finish off the summer 2019 hypnotist james Graham update, North America’s most Hilarious Hypnotist, was flown north to Baker Lake Nunuvit Canada to be the headline feature performer at the Festival by the Lake.

Baker Lake is 1000 miles north of Winnipeg Manitoba and it took 11 flights to get there and back. Needless to say, the Windsor hypnotist racked up a lot of frequent flier miles.

These three highlight hypnosis shows were in addition to the ten other shows Graham performed this summer across Ontario, Canada and the USA.  James also performed at fairs and colleges to end off the summer.

Windsor hypnotist programs can help many people improve their lives thru the use of self hypnosis programs.

These specially produced audio hypnotist programs come in a wide range of topics. They also address a large variety of personal issues that every person may experience in their lives.

These topics and personal issues include everything from helping people to lose weight, quit smoking, sleep better, make more money, create confidence, improve memory and so much more.

Windsor Ontario Hypnotist James Graham has created a specialized selection of self hypnosis programs and made them available to the public on his website, MindPowerPrograms.com

The Windsor hypnotist began producing hypnotist programs back in the year 2000 for himself and special hypnosis clients.

He discovered the power of self hypnosis mp3 programs when he saw an ad in Rolling Stone magazine that claimed one could double their income by using a guided meditation hypnosis audio program.

The instructions were simple. All you needed to do was play the audio program at night when you went to sleep. What happens is that when you fall asleep, your conscious mind shuts off. This leaves your subconscious mind open to suggestions.

After using the make more money self hypnosis program, he received a new money making opportunity that was double what he was currently making. From that point, he was hooked on hypnosis!

The Windsor hypnotist programs James Graham created have helped many people improve their health, increase their wealth and better their happiness.

Some of James Graham hypnotist weight loss clients have lost up 65 pounds using his Thin In 30 Days self hypnosis weight loss program. Other have stopped smoking, reduced stress in their lives and even increased their incomes. All by playing his specialized guided meditation self hypnosis programs available on his website, MindPower Programs.com.

If you are struggling with weight loss, health issues, career and income challenges or just looking for answers, Windsor Hypnotist programs might just be your solution.

Contact James Graham Windsor Ontario Hypnotist to see how he can help you live better, on purpose!

Graham is James’ last name, NOT his first name and should not be confused with anyone named Graham James. Or anyone else for that matter.

According to Google, the given name, Graham, originated from the surname Graham, which is derived from Grantham, Lincolnshire, England.

In the 12th century the surname was taken from England to Scotland by Sir William de Graham, who founded the Graham clan. Variant spellings of the surname are Grahame and Graeme.

Scottish Grahams claimed descent from a clan chief called Grame, but the first authentic bearer of the name was William of Graham who was actually a Norman.

The Graham name is also thought to be of Irish decent as well but there are debates about whether that is true or not.

Like the name Graham Windsor also comes from England. Windsor is a small city in Berkshire with a population of
32,184 people.

It’s located in the South Eastern part of the United Kingdom. It’s known mostly for the world famous Windsor castle.

According to Geo targeting, there are 49 places in the world named Windsor including Windsor Ontario.

This city is affectionately called the city of roses. According to one blogger on the world wide web, Windsor got this nickname because so many Windsorites had flower beds full of roses. I’m not sure if this is true or not, but it does make for a great story!

in any case, the names Graham and Windsor have a long history that comes from thousands of miles away. Both names carry much respect and admiration and are proudly honored.

Windsor Ontario hypnotist Jimmy G is known as being the funniest comedy hypnotist in Canada.

Windsor Ontario has been home the hypnotist since 1981. That’s when Jimmy G moved to Windsor from Tilbury Ontario as a musician.

At that point, Jimmy G who was years from being a hypnosis entertainer at that point, joined a touring rock band from Windsor Ontario called Destiny.

The hypnotist has called Windsor his home base since then. Although Jimmy G travels extensively, he loves the rose city. It’s been JimmyG’s home where he has established himself as an honorable man.

Even though the Windsor hypnotist has always done the right things, a few people have tried to destroy him with false accusations

Haters who posed as loving women tricked him into relationships that now threaten to destroy his career and life. This is also what is happening to many men in Windsor Ontario every year.

A Windsor Ontario hypnotist is a huge target and seen as evil by society. The feminist agenda is out to convince the world that all men are evil. And now that the Canadian government is run by feminist Justin Trudeau, they have changed the law of protecting the innocent to making any man accused by a woman automatically guilty.

Ironically, Prime Minister Justin Trudeau, who admitted to innappropriately groping a female, had his assault conveniently swept under the rug.

This goes to show the hypocrisy of sexual assault laws in Windsor Ontario Canada. Unless your in a high office and have the police, crown and judges in your back pocket, every man is at the mercy of the new #MeToo witch hunt.